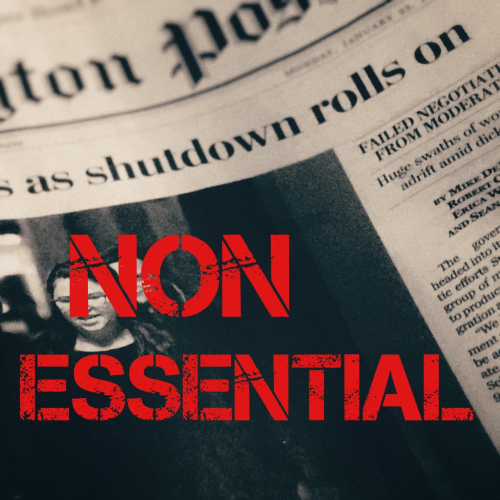 You skipped the suit coat, dress shirt, and pants this morning, instead grabbing a t-shirt and pair of jeans. No briefcase needed, just a few books. The morning would be long, and all you'll be allowed to do is sit...no answering the phones, no touching the computer. Just sit and wait for the powers that be to show up and hand you a several page document that lists a few "Thou Shalls," but many, many more "Thou Shall Nots."  Thou shall not use any government issued technology. Thou shall not answer your government phone. Thou shall not attempt to sue the government. After signing off that you've received your furlough packed, you'll be allowed to leave and head home for an indefinite period. In the meantime, the  books would help pass the time. The last go round, you waited 4 hours for the packet bearing folks to show up.

It's a miserable thing to be deemed "Non-Essential." The biggest minus, of course, is the lack of a paycheck. But, it does something to the psyche. After 40 plus years of doing your job, and doing it extremely well, the message is sent that you don't matter much. All those years of putting in your 8 or more hour days, then coming home, still on call, answering phones in the wee hours of the night and then heading downstairs to telework so that one problem or another gets solved, well, none of it matters much. And people from all over, weigh in with the certainty that you're nothing but a free loader anyway.

You don't know when your next pay check will come. Simple things get put on hold; you don't want to use the gas, so you mostly stay put. The grandkids sometimes get told "no" when something as simple as a request for McDonalds is made. You need to be careful, because if this thing goes on for more than a week or so, the next step is to contact utility companies, creditors, etc. and ask for mercy. It's one huge dose of humble pie.

My husband is one of the thousands and thousands of faces of this budget mess. While senators, representatives, and more argue their lines in the sand, we just wait and pray.

It sucks to read folks from all over the country commenting "Good. I hope it stays shut down." Or, read the VIP in charge of shutting the government down, pronounce it, "Kind of a cool feeling." The president's son states that this shutdown is "good for us."

I don't know what the answers are. I do know that I  blame both sides, each one so focused on getting what they want, that you just don't much matter. Oh, they all sometimes preach a good game, but they get paid. They're getting paid for not doing their job.

I also know that some of what each side is arguing for is important. Terribly important. But, you also want them to just pass the budget, or at least a continuance, and then address these matters. You just want them to stop using all the issues and you as bargaining chips.

The news is another ball of wax. On one hand, it's your life line to the possibility that you might get to go back to work. On the other hand, it's a mess of conflicting information and a blame game. Honest to God, my middle schoolers behaved better than these "esteemed gentlemen and ladies." And, if they didn't we firmly addressed the matter. I am so tired of the name calling and blame game. Last night, I read one article that held out hope that some progress was being made, that "they" were working hard to the government open. The next article plainly stated that no hope was to be had. Both news agencies are respected sources, but they told such different stories.

I know I have it better than so many folks; I have food to eat, a roof over my head, and much more. I keep trying to put it all into perspective. Most of the time, I can do it. At other times, the anger and worry wash over me like a tidal wave.

We'll get some yard work done, a few house projects will get completed. There are closets to be cleaned and stuff to be decluttered. We won't sit around feeling sorry for ourselves.

But, still, it sucks to be "Non Essential." It just sucks.