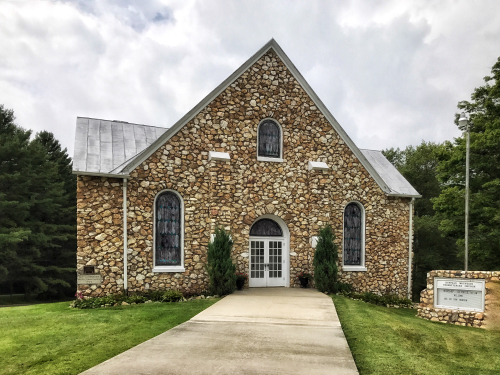 "Have you seen the stone churches?" she asked.

Phil and I both shook our heads no, and then asked the inn manager to explain.

"Oh, you've got to see them," she said. "There are 5 of them, scattered through the mountains here. A man named Bob Childress built them, all from stone quarried locally. They're still being used today."

"In fact," she continued, "there's a book about him. It's really good; I need to keep buying copies, because I never seem to get them back, when I lend them out! It's called The Man Who Moved a Mountain."

Turns out that Phil had seen the book when we were at the information post the previous day, and he'd nearly picked it up, so we now knew just how to spend our day.  We headed back to the information post, bought the book, and picked up a free map plotting out the location of the churches.

As we wound our way up and down, around bends in the road, through miles of tiny isolated towns, I read the introduction to Richard C. Davids' book.

"Then a man named Bob Childress came to live there. He had grown up a mountain man with mountain habits. He drank. He fought ambush-style, with rocks and pistols. He was scarred from many brawls and twice wounded by gunshot. But something happened to change Bob Childress, and the change in him shook and transformed Buffalo Mountain."

Continuing through the introduction, Mr. Davids notes that he sat on hundreds of front porches, listening to hundreds of memories, some of which seemed unreal at first. Visiting the churches, we learned the memories continue to run strong.

We arrived at the first tiny church just before services began. Trying to remain unobtrusive and respectful, we hung in the background as much as we could. Chatting quietly with Phil, I looked up, and thought, "Oh - Johnny Cash!"

A tiny older man ambled down a mountain road toward the church. Obviously dyed coal black hair slicked back just so, a black shirt and tight black jeans on slightly bowed legs, he sported a huge  bel buckle. Tucked into one hand was  a well worn, well read, and obviously treasured Bible.

Wishing us a good morning, welcoming us to the area, he asked where we were from. We explained that we'd just learned  about the 5 churches, and we hoped to visit each one throughout the day.

With a huge grin, he began to talk about Bob Childress and his beloved churches, and he asked if we knew the story of how it all began.

"Well, Bob, you see, worked at the quarries...hard, difficult work, and there's wasn't much to do here to break up the boredom. One day, Bob looked around at all the rocks and decided that the workers should have a "Prettiest Rock" contest."

And, so they did, because if it was one thing they had, it was rocks! Everyone for miles around brought their best rocks, some that were crystals... 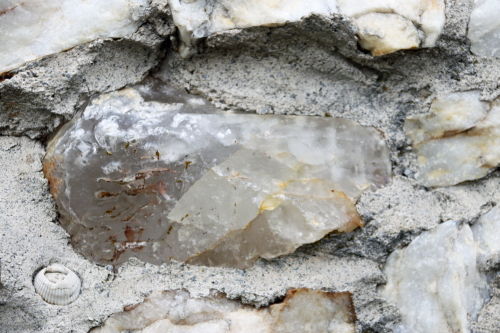 ...and even a few treasured sea shells. 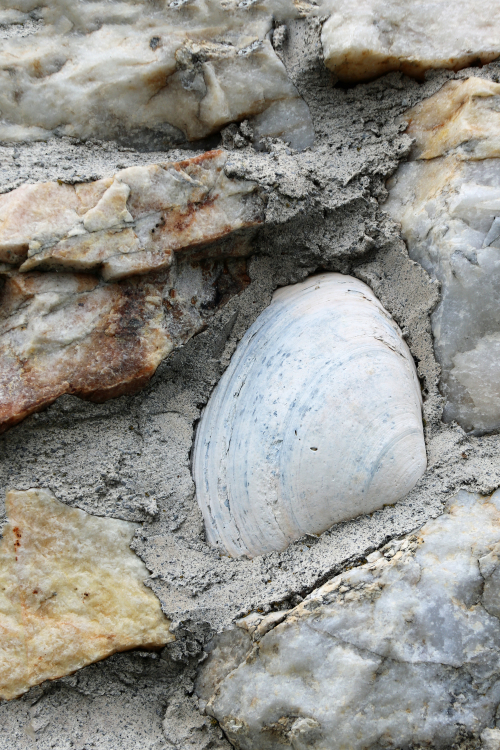 My want-to-be Johnny Cash continued. The contest, it seems, was a huge success, but when he was done, Bob did not know what to do with all the rocks. Praying on it a bit, he figured that the good Lord wanted him to build a church, and so he did.

The story didn't make complete sense to me (Who, after all, would leave their best rock behind?), but I loved listening to it, as much as "Johnny" loved telling it.

Sounds coming from within the tiny church signaled the beginning of services, so we shook hands and thanked him for his time. He grinned back at us and told us that he loved telling folks about his church.

Back into the car, we again drove through mountains and tiny towns, heading toward the next church. This time, we arrived just as services ended.

Trying again to be unobtrusive, we hung back a bit, but a tiny wisp of an elderly woman opened up the door to an SUV,  and smiled. "Oh, you just missed services! We would have loved to have had you."

As we began to once more explain what we wanted to do, a slightly less elderly man walked over, and smiling, he joined us.

Eventually, he grinned, pointed to the frail, wisp of a woman, and said, "Well, you've got a great source here. She's related, you know."

With a twinkle in her eye, she told us that she, Anna, was 91, and that Bob Childress had been her father-in-law!

Phil and I shared the "prettiest rock" story, and the gentleman, grinned, and smiled. "Well, you know, that Bob came to the ministry later in life. He'd gone to Richmond, VA, to study, well after he was married and had 2 children." Turns out there was obviously more to the prettiest rock story, and of course, he loved to share it.

So, we settled in for a good visit, and within just a few minutes, Anna and her companion, offered to unlock the church and take us inside. How could we have refused?

They went on to explain what a good man Bob had been, and that he really did end up working himself to death, always there for whatever a parishioner needed. We wandered through the tiny church, looking at photos of Bob and his sons, all but one, continuing the work of ministry. In fact, a few of Bob's descendants, preach at the churches today.

I think we must have visited for nearly an hour, gaining bits of information. Bob didn't build the churches himself; there may or may not have been a contest, but the congregants did haul rocks in from near and far, all of them coming from the mountains. Bob arranged for two men, experienced in building with stone, to come and construct the churches.

As we left, the gentleman pointed out where valuable pieces of quartz crystal were chipped from efforts to remove them by folks in need of the money. One church lost its best stone completely. Our guide seemed matter of a fact; some of the mountain residents were dealing with hard times. He seemed to understand why it might have been done.

Tiny Anna hauled herself up into their vehicle, grinned and waved.

"Come back again, " she implored us. "Come back. We're a tiny congregation, only about 25 of us, and we'd all love to have you."

And, I'm pretty sure we'll do that on one of our next visits.

We hugged our good-byes, and then we left to visit the remaining churches, with stories swirling through our heads, chatting about how much everyone wanted to share their stories, and in Anna's case, her family stories about Bob Childress. We all shared our stories, each of us genuinely interested and wanting to make connections.

All of us have stories, and we all need a chance to tell them, and a chance for someone to truly listen to them.

P.S. The book is filled with stories of mountain folks, their towns, and their churches. The stories are told simply and with great love. As we wandered our way through the area, chatting with local residents about our wanderings, everyone stated..."What a good book! I have several copies, you know..." If you're in the mood for real life stories about real life, ordinary folks, get yourself a copy and settle in. The mountains, it seems, loves a good tale or two.