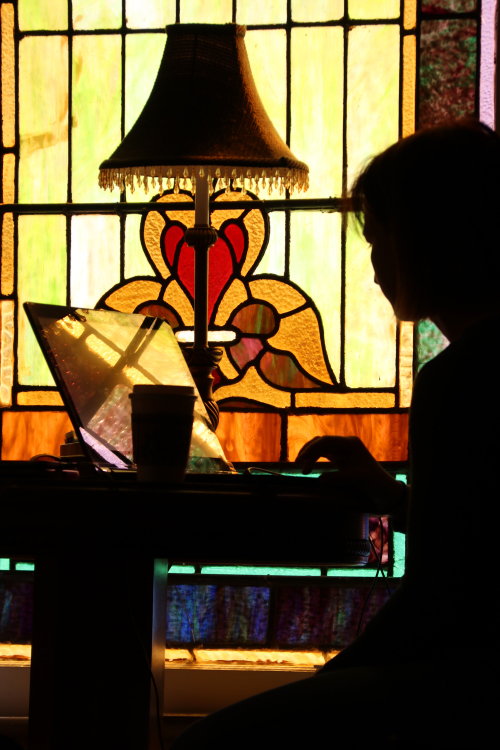 Well, maybe if I just stopped to admire this porch, a wonderful wrap around porch, the kind you sit on and watch the world go by, well, maybe I could. Brunswick, MD's hills provided quite the workout.

Just then, a quavery voice rang out. "Hello there, it's a beautiful morning."

I grinned at the elderly man rocking away this February day.

"Hello," I answered. "Hello. I'm just admiring this wonderful porch: I love it. " I didn't go into the specifics of needing to catch my breath.

"Yes, I've been here 8 months now. When I was looking for a place to stay, I saw this porch. And, I thought, this will work. Yes, this will work." He continued on, sharing a bit of his story, and I listened contentedly, whispering a pray of thanks for this elderly man wanting to talk.

At the end of it all, he wished Phil and I  a good day, and we responded likewise. I love small towns for this reason; everyone enjoys a good visit.

Making our way up the rest of that dratted hill, and loving the fact that the return trip would be downhill, Phil and I reached Beans in the Belfry. We'd found quite by accident one winter's day, hoping to visit a nearby rail museum.  Despite its website stating it would be open, we found the building shuttered and dark. In search of things to do, we'd found this coffee shop. Intrigued by the name, and the obvious fact that at one point in history, it had lived its life as a church, we wandered into an eclectic mix of various tables, sofas, chairs, and the most wonderful aroma imaginable. Sounds of a blue grass band mingled with conversation and the clanking of dishes.

And, here we were again, hoping for more of the same.

Phil grabbed a menu, and just as we began to figure out what we'd eat, another elderly voice inquired, "What sort of photos do you take?"

I looked up into steel blue eyes and a very wrinkled face. Leaning against a walker, he went onto tell me he photographed all sorts of things, but mostly trains. He collected them, you see, and he'd been a worker on a train once.

I happen to love old people, and full disclaimer, I happen to be well on my way to being one. Despite my 60 plus years, this gentleman obviously had at least 20 on me.

Phil and I put down our menus, both being well trained in manners, respect, and both of us, lovers of stories. We didn't have a firm agenda, and well, how long could a man, dependent on a walker, stand and talk?

It turns out to be a very long time.

I saw my dad in him - the somewhat rumpled mish mash of clothes, funny tufts of hair in odd places, and the crazy meandering threads of conversation.

Where were we from? Did we come here often? He came every Sunday; he'd been coming for years now, ever since the place opened.

Gesturing toward a chair, he explained he'd written most of his novel there.

What trains had we ridden? He'd been on one that traveled across most of Alaska, a special train just for his group. It reminded him of when he worked on a train, supervising the dining car. He had to get there early, to begin breakfast and have it ready. The bosses got to know him, let him ride in the engine, but he couldn't stay too long. So much of his help was teenagers, you see, and they required close supervision.

His voice often got lost in the din of cutlery, the sounds of nearby conversation, and the live music. My mind kept flitting back to my dad and his love of stories, to all the times he'd converse with anyone and everyone. He wanted to make someone laugh, often reminding us that if you made someone laugh,  you'd done good work.

Most of all, I knew this man needed to be heard; Phil and I took delight in obliging.

A worker walked by, asking where he would like his order. He pointed to the chair he mentioned earlier, explaining that the person seated nearby would be sure to watch it for him.

I think the conversation continued for a half hour before he left us, stopping promptly at the next table with another opening conversational gambit.

Phil and I just grinned at each other; I pointed out that he would be that same type of old man, talking to everyone.

His response? "I already am!"

As we ate, I'd turn around now and then, to check on our new friend, always finding him engrossed in conversation with someone. As we left, Phil reached out to shake the old man's hand and thank him for his conversation with us.

With a twinkle in his eye, he smiled and reminded us that he'd be here every Sunday and would love to talk with us again.

Much to Phil's delight, we found the train museum open, and lo and behold, volunteers wandered about in the form of little old men, anxious to share the place. They firmly corralled us, along with a few others, and new conversations began.

I have to admit, after a few minutes, I excused myself.

I can talk cameras and photography. I can also talk train rides.

Scale and layouts baffle me, and headaches follow as I try to make sense of it all.

So, I left Phil happily engrossed in it all, followed around by said volunteers, chattering away.

Instead, I wandered the second floor, admiring bits and snippets of the past and indulging myself in playing dress up in the kids' corner.

And, I thought a good bit about the elderly and their love of stories, their wanting to be seen, heard, and valued. It costs so little to sit and listen, a bit of time mostly.

I thought about all the wonderful folks who'd given my father that time, and I said a quick prayer for all those who had no one to listen to them.

Probably Old Women as well, but for some reason, I seem to come across the men more often. I've heard wonderful tales told of days growing up as a slave, and how proud one man was to be a house slave after growing up picking cotton in the fields. It brought history home and made it real.

Stop to listen; they tell the best stories.

IF you and I are lucky enough, we'll be the ones telling the stories someday.

And, hopefully, someone will stop to listen.