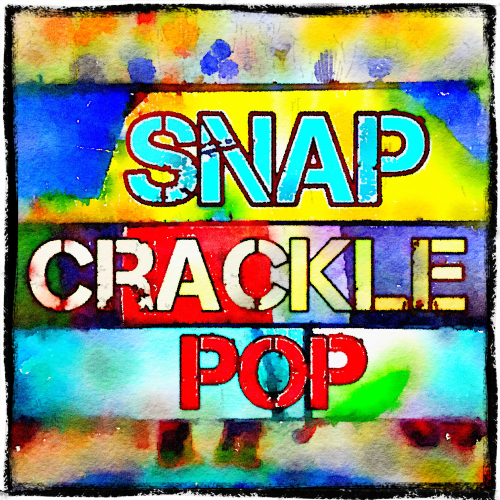 If you're at all like me, you're thinking Rice Krispies, but nope, you're wrong.

It's more like "Bogdan's Home for Malfunctioning Body Joints."

His knee; my shoulder, and they're wrecking havoc here.

Let's begin with his knee, which is pretty much sans cartilage, that nice stuff that cushions things a bit. Bone rubbing on bone creates pain, lots of pain. You hobble, lurch, and often walk like you've been nipping at a flask in your hip pocket.

Your blind, deaf cocker spaniel beats you up the steps and then bestows a huge doggy grin on you. (Miss Buffy has been gone awhile now, but she did love to race her daddy during these times!)

Our family doc took one look at the knee, and then stated that while he was not an ortho guy, he felt pretty certain that another knee replacement loomed. Of course, it does. We've got beach plans next month, a NY trip in October, and I have an art retreat in October as well.

At any rate, Phil began the referral process, and the powers that be promptly kicked back the referral. For this go round, it's to be Walter Reed Hospital, the same hospital where Phil had the president's physician "practice" on him, trying to do some blood work, etc. My husband's veins did not make the task easy.

So, now we wait for the referral to get into Walter Reed's system, and then call to make an appointment. Something tells me that before the process nears completion, October will have come and gone.

Phil's well versed in this game of doctors and hospitals, knowing the drill inside and out. Me? Not so much.

I've been blessed to have very few encounters with the medical profession. A healthy fear of needles plays a part; so do some apparently very healthy body parts. Well, at least until now.

My shoulder's been sore, beginning with that feeling of having slept the wrong way. Mildly uncomfortable, just enough to make you take notice, but now progressing to some pretty solid "Oh, hell, that hurts," to worse.

I want to sleep on my right side; I can't.

I go to grab the laundry from the dryer and say words that my twits don't need to be hearing.

And, the first time my shoulder crackled and popped, I sat straight up in sheer disbelief.

A few days ago, we went to kiss good night - Phil on one side of our king sized bed, me on the other. We both began inching across the great abyss, each of us nursing our respectively sore body parts.

We inched some more.

Then, we made the mistake of looking at each other's faces and just lost it.

Two grown adults laughing like loons, wanting to just roll with the laughter, but cursing when we hit a sore part.

Finally, managing a straight face, Phil told me that it didn't matter what I thought, he would be making me an appointment with our doctor.

Two days later, I found myself buried in a sheaf of medical forms. Since I had not been there in a "good while," they needed me to update my forms.

Date of last menstrual period? I wrote, "a hell of a long time ago."

With Phil watching and trying not to laugh, I slogged through the forms, adding other question marks here and there.

Handing them back to the receptionist, she briefly checked them, looked at me, raised her eyebrows slightly, and professionally uttered her "thank you."

I slunk back to my chair, just a bit mortified. Notice, I say "a bit." That fear of needles will most likely produce the same effect once I'm through this mess.

The same good doc that referred Phil to an ortho figured I had a turn rotator cuff and sent me packing downstairs for x-rays and more forms. Answering pretty much the same questions, it seemed to me that with the two offices connected, along with a lab, computerizing it might be the way to go. For now, it was papers on a clip board and a ball point pen.

I entered more question marks, and Phil just sat back, grinning, and enjoying that the shoe was on the other foot, most especially that the darn shoe was on my foot.

I turned in my forms, earned more raised eyebrows, and was told to wait.

Back to my seat, I slunk, only to inform Phil that his idea of a hot date stunk.

At last the guardian of the door called my name and ushered me back to the inner sanctum of x-rays, telling me to strip above the waist and put on this gown.

Uhm, this procedure took a while, more than she thought.

Checking to see if I was ready, because really, what could I be doing in that changing room...I slumped my poor aching shoulder in defeat and asked for help. When you arm refuses to bend, getting undressed and putting on a medical gown becomes reality tv.

God bless her, she smiled at me, reassured me, and I slunk down another hallway to let the games begin.

Because, you see, she wanted me to bend the darn arm...this way, now this way, and oh, let's take two more shots since you're having such difficulty.

Eventually, with a few tears and some muttered oaths of damnation, we did what we needed to do.

Once again, I asked for help with the gown, received it, and then struggled back into my clothes.

15 minutes of waiting got me a disc, and we left for home, another hot date on the books.

Yesterday, my doctor called to say there was no tear, and that I probably had rotator cuff tendinitis, and please, be sure to see the ortho guy as soon as possible.

And, now we wait.

Will my referral be accepted by the great and might OZ?

Or will it be kicked back, and is Walter Reed in my future as well?

Only time will tell.

In the meantime, bring on the ice packs and Tylenol.