Getting the Crankies Out

Of Coffee Pots and Journaling 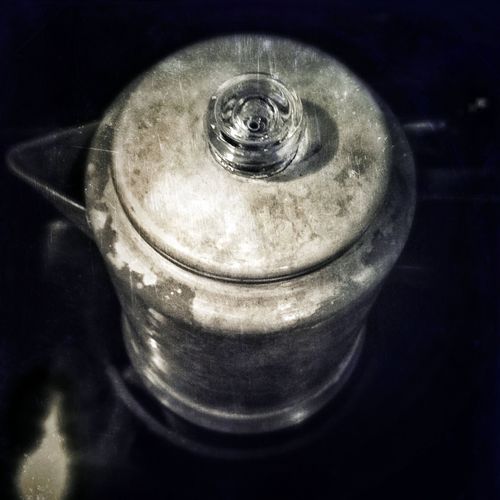 I'm sitting here in my art studio, sipping the last cup of coffee from this morning's pot, savoring it, and just thinking about creativity's ebb and flows.

It's a battered old thing, this pot. Near as I can figure, with a bit of help from Google and Etsy, it's going on 60 some years old. Nearly as old as I am, and both of us dinged up a bit, but still going strong.

Some years ago, as we packed up Dad's home, I rescued this poor baby from the pots and pans' cupboard, beneath the built in stove. I hadn't seen it used in years; Mom, then Dad had moved onto its more modern relatives, but being the Depression babies that they were, had hung onto it, "just in case."

I carried it home to Virginia, not really thinking I'd being making coffee from up, and for a long time, it just sat in my kitchen, making me smile with the memories of the past.

Just for grins and giggles, as he says, Phil decided to experiment with it one day, and it's been pressed into service ever since. If we're not in a hurry, it's put to work. There's something about watching the brown liquid begin to perk and bubble with a sound all its own. A rich aroma works its way through the kitchen and up the stairs, telling me as one of the grands puts it, that it's sunny time.

Maybe it's my imagination, but the coffee is richer and deeper somehow, and if I'm not careful the first sip or two can scald my tongue.

I've been in some sort of creative funk lately. It's not that I don't have ideas; I do, and there are lots of them. But my energy went missing, and other than perusing the net, and getting lost in its rabbit holes, I've simply been reading the kinds of books that don't make you think, or playing Suduku and Solitare.

Yesterday, I decided that enough was enough, and I pushed myself to pick up the paintbrush, acknowledge the crankies, and just get started, not putting any great importance on the outcome. 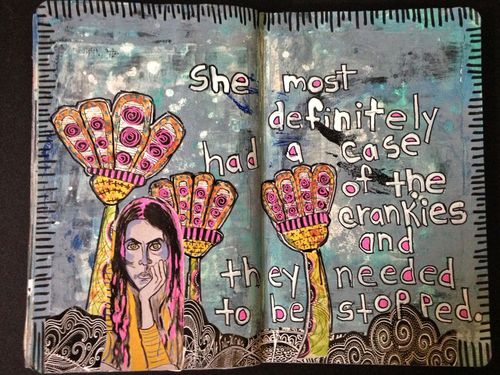 I've never been a believer of making my journals just pretty images, of somehow sending out the message that everything is just hunky dory. And, I figured that maybe if I acknowledged it...not bemoaning or wailing about it...just simple acknowledgement, that I could move past this bit.

I can't really describe just how good and right it felt to play with the paint colors, images from magazines, and to just cut and glue. Therapy, indeed.

I had to laugh when I found the image of the girl; she's just so perfect. If I had gone looking for her, she never would have appeared. I just started putting down marks, paint, etc. letting the page become what it needed to be. I altered the cut out images, making them more my own. I didn't fret about wonky letters. I just kept going, and the more I did, the better I felt.

To, make a bad pun, more than the coffee is perking. Ideas are stirring, stories asking to be written, a photography class to be planned.

Sometimes, I just need to begin. The rest usually follows.