Light Dancing
And It's Pouring Out There

The Cows Couldn't Offer Any Help 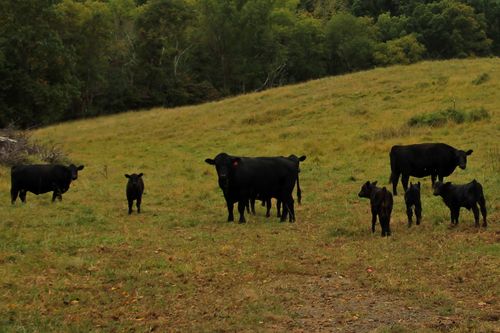 Yesterday, I spent time picking...well, watching my husband and twit#1 picking...about 55 pounds of apples. And, for just a few minutes, I tried a bit of conversation and mind melding with the cows and their leader - that big guy in the center, otherwise known as a bull.

Mostly, I shot photos while the picking commenced, but when I got home I noticed that my I Phone and I Pad weren't not playing nicely together. The phone insisted on hogging its photos all to itself, which annoyed me no end. My eyes wanted the photos on the I Pad; its screen is bigger, and I edit far more easily.

But, nope; not gonna happen; the phone just pitched a fit, ending in typical fashion, just sitting there, mocking me. Turning it off and on didn't help; resetting it didn't help. So, I did the smart thing and went to bed, hoping for better luck in the morning.

So, at 5:30 this morning, my good friend, Mr. Google and I chatted. Mr. Google kindly sent me on my way the the Apple Help Page. The first several responses caused my eyes to cross, me to say a few choice words, and then to wonder why my two devices still carried on their feud, and why I shouldn't just chuck both of them right out the window.

Phil snored away; I thought about waking him up, but in the interest of a happy household and marriage, chose not to do so. You see, he's not an Apple guy, and he'd just do the same thing, go see Mr. Google. He'd then end up on the Apple Help Page, begin to swear, and we'd have two unhappy cranky people in this household. No, not a good choice.

So, I continued to plow through responses to this particular problem (Apparently, it happens fairly frequently.) trying various suggestions, none of them seeming to work.

And, then, I read it, that horrible piece of news. If I did manage to work a miracle between the two feuding parties, the photos I shot yesterday would remain on the phone alone. There was no fixing matters after the fact.

According to Apple, I needed to do various magic things and then try shooting another photo, and see if it appeared on my I Pad.

Yay! Somewhere along the line this poor 62 year old brain, hit the right combination of buttons and sliders.

Yesterday's photos offer two options: 1) Just edit them on the phone and suck it up as far as dealing with that tiny screen. 2) Email every blasted photo to myself, save it, and then edit it.

Oh, the cows? I suspect they're still standing around chewing their cud. Their fearless leader, Mr. Bull stands guard at the fence, daring the apple pickers to come closer. And, a few young ones periodically, kick up their heels in glee, frolicking away, not a care in their world.

None of them could care less about my photos of apples. I mean, they didn't even want anything to do with eating the apples a few brave souls offered up yesterday. I think they are completely over apples.

And, it could be that I'm completely over them as well, at least for the next few days. Did you notice that I chose to edit a photo of some cows, and not some apples? Granted, this is a dslr shot, but still, NO APPLES!