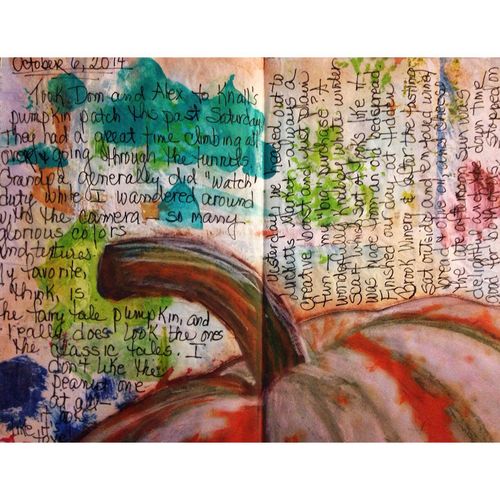 Why do I journal? For that matter, why does anyone journal?

Reasons vary, and I suspect there exists as many reasons as there are types of journals.

For me? It's to remember moments in time, good or bad. Sometimes, it's to make sense of moments I'd rather forget. Somehow, when I write, I tend to be more honest with myself. The putting it into written form gives weight to the words, and if I get uneasy in my gut I know that I'm trying to rationalize or to delude myself. If it's too private for anyone but me, I can - and do - cover up the words. I still know they're there; I know the essence of what I wrote, if not the exact words.

As I type this, I realize I know far more stories about my dad's growing up and growing up than I do of my mother. And, really, I don't know many about my dad. My parents didn't tend to talk about that sort of thing; I think that maybe they just simply got caught up in the making of a living, the raising of 4 children. The everyday stuff never seemed to be anything worth recording, but that's what I miss knowing. The record exists of the big moments, the weddings, deaths, births, and so on, but not much of the little moments of their lives, of what they were thinking or enjoying.

My dad tells so many stories now, but they are garbled bits and pieces of things, fact mixed in with fiction. His dementia robs him of making much sense. The bits that come through tantilize us, but, most likely, they're lost.

So, part of what I do is to put it all down, to preserve the memories for my kids and grands. Maybe it won't matter much to them in the long run, and maybe it will.

I finished the piece above yesterday; the words at first glance don't speak of anything significant, but then again...well, maybe they do. They record memories which otherwise might be lost forever. I'd like to think that at some point in time, someone will sit down and get lost in my journals. Who knows?

Note: The journal pages above are a mish mash of things, or as the ever present crossword clue would say, an "olio" of things. I enlarged a photo of the pumpkin patch trip, and then went over it with Neocolor II crayons, blending it into the background. And the background is in itself another olio of materials from the studio desk, most of it underpapers, the papers that catch (well, mostly catch!) the spills of paints and inks. Pulling it all together reminds me of doing jigsaw puzzles; you think a piece is going to work, and then it doesn't. So, you try another piece until you get one that works. And, so it goes with all the scraps and pieces littering the table.

We're off tomorrow to Bedlam Farm  in New York, to meet Jon Katz, Maria Wulf, and other online friends; to visit Simon, the donkey, and Red, the dog...among others!

Posted at 02:06 PM in All About Me, Moleskine Journals, Travel, Visual JOurnal | Permalink | Comments (0)