Photo Heart Connection - All Aboard! 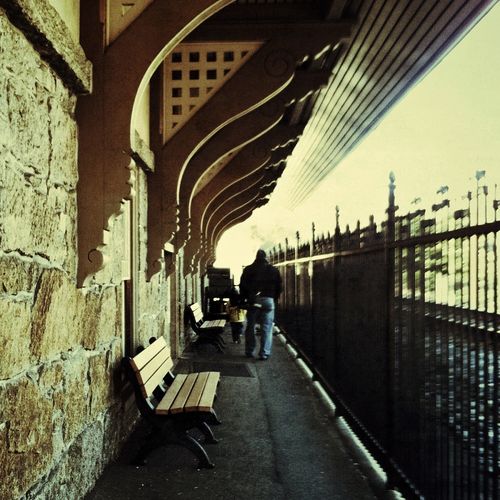 Grampa: Are you sure? You know...like the trains Grampa has. See?

So, let's revert to Plan B.

Grampa heads up the steps.

Grampa: Paula, I think we should get Dom out of the house. I'd bet he'd like to see some trains.

Me: Do you think we could go there sometime when it's warm? We always seem to end up there in January.

Grampa: Well, they have an exhibit...model train set ups. I think he'd like it.

Some hours after the adventure ended, Grampa clued me in on the intial part of the conversation.

I love this picture; I snapped it with my iphone as I trailed behind these two characters.

There is a timelessness about it, a grampa and his boy.

The day froze our faces as we hustled from the parking lot to the old train station.

Dom was utterly fascinated by the wide windowsills and being able to overlook the old little town. It took some doing to get him to leave his perch and see the displays.

And then, magic occurred. He discovered there were buttons to push. He could make the trains move, the helicopter spin, the children swing, and so much more.

And, as we left, we stopped at a tiny chocolate shop. Dom's expression said it all; he clearly was a kid in a candy store.

After much deliberation, he settled on a huge chocolate coveed strawberry, and he just kept grinning and saying, "Look...my very own strawberry!"

I'm sharing this with Kat's Photo Heart Connection. Somehow, last year, life got in the way, and I stopped choosing and writing about these connections. Not so long ago, Kat sent a lovely email inviting me to reconnect. Take a few minutes and visit her site; there are so many many wonderful stories and photos, just waiting to be shared.

This is a lovely PHC and such an atmospheric photo. thanks for visiting me.

It's so wonderful to have you back, Paula! What a wonderful story and image. It does have a timelessness to it. It made me smile, reading the whole story and seeing that photo as a memento of the day. Although it seems to me that maybe Grampa wanted to see the trains the most! (That would be my husband, too.) Thank you for sharing in the Photo-Heart Connection.