Portrait of the Mad Hatter
Enter the Cranky Birds 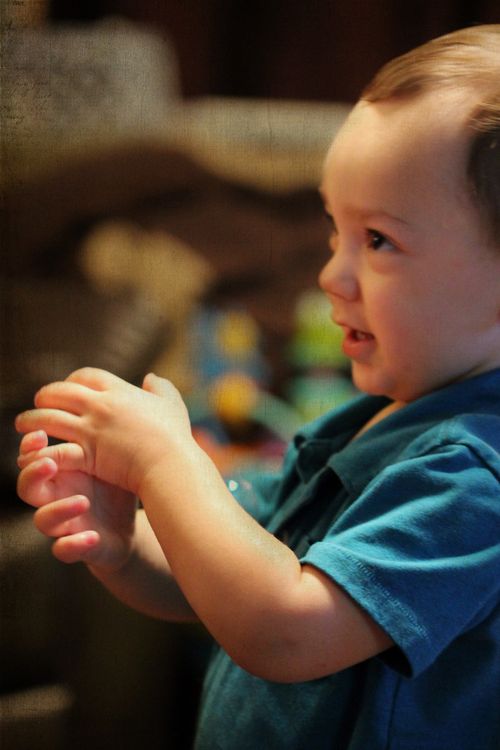 Look at those eyes...this little one is so intent on his grandpa. He's just finished signing the word "more," as in "More bubbles, please, Grandpa."

Our Alex was diagnosed earlier this year, with a 25% speech delay, along with a delay in fine motor skills. His pediatrician caught it, and from there, Alex was tested. His receptive skills are advanced, but he just couldn't make those words come out.

Alex has weekly sessions with a therapist, who visits him at home, engages him in play, and knows how to push a bit. Alex fought us on this for quite a while. But, think...how would you feel if you were pushed (and we've all learned to push a bit now) to do something that just didn't come naturally. And, that you were pushed all day long. Can you say "frustration?" Throw in a few temper tantrums as well.

In the beginning, we worked on signing, so that Alex could make his needs known, rather than mommy and everyone else playing a guessing game. And, it empowered Alex, gave him some control that he didn't have before.

And, the words are coming. Bubbles is a favorite, and so is "DONE!" said with great emphasis. Night-night, dog, cat, piggy, and so on.

His therapist thinks that Alex knows what should be coming out of his mouth, and when he can't make say what he wants, gets even more frustrated. It's a bit of fine line...to push to make him get those words, but to not push so much that he rebels against anything that smacks of talking.

All of this fasciantes me...the brain is so complex, and you and I take so much for granted. Babies learn to talk...it just happens. Except, some times it doesn't.

Our Alex will be fine in the long run, and we're grateful for that.

In the meantime, he smiles at his grandpa, says "more" and then "Bubbles." And to celebrate the progress Alex has made, and also, because, he just plain loves Alex, grandpa obliges.

This little one, with all his struggles to do what you and I take for granted, has my heart.

Here's to the doctors who diagnose, the therapists who put up with temper tantrums, and to the families who work with this and so much more...you have my heart as well.

Such a heart warming post, it makes us realize how just how important things we take for granted really are. Bubbles are always fun, here's to more fun for Alex and the rest of your family. xox

Love and bubbles, the universal language !
Big love to you and your Little Buddy !

Beautiful! Yes, we take so much for granted.

Thank you so much for sharing such a wonderful post. It touched my heart.
Alex is such a brave little boy. I admire and respect him so much!