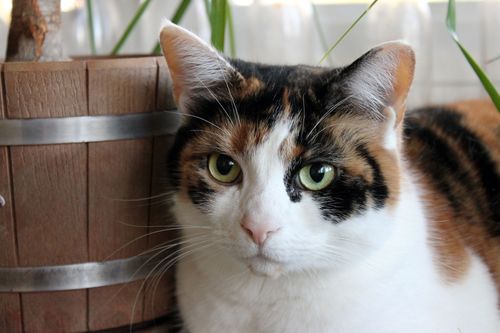 I'm not sure where Josie began her life, but she came into dad's life shortly after mom died. Dad chose her from a local shelter, and as he puts it, "She saved my life many a time."

Josie knew just where dad would fall asleep on the couch, and as night fell, she'd curl herself up just so, perfectly positioned for dad to curl himself up as usual. (Dad could not go back to the bed that he and mom had shared.) She'd purr in sheer delight as Dad talked to her and stroked her. His children were still a part of his life, but Josie was his mainstay.

As we began to close up dad's home, we debated what to do with Josie. We all had cats, and introducing one adult cat to another is no easy feat. A neighbor fed her for us and even offered to take her. In the end, we felt that it would confuse Josie when she could not find dad. And in the end, we knew that we owed Josie; she had freely given dad years of delight.

So my sister took her home to meet Zeus. At this moment, they generally reluctantly tolerate each other. Josie spents weeks in the basement while Zeus claimed the upper floor. Eventually, she calmed down and began to venture upstairs. Warfare erupts on a frequent basis, but she's starting to hold her own. We see more and more of her.

In his mind, dad is still home. Wheelchair bound, he still reaches down to pet her and often tells her what a wonderful girl she is.

Oh, she is beautiful.
Glad she is slowly settling in to her new home.
Hugs, Wonderful ONe!