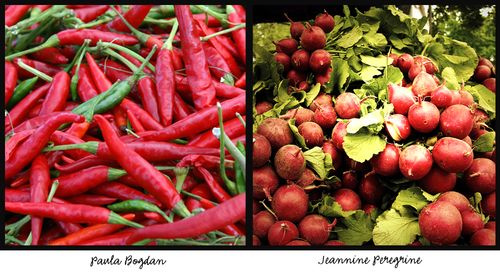 My good friend, Jeannine, asked me if I'd like to "play" along with a photo project called Echo.  Every 2 weeks or so, a theme is chosen, and photographers submit their interpretation of the theme. You can find information on Chrysti's blog  and on Susan's blog  as well. If you'd like to take a peek at a few more, hop on over to the Flicker group  found here! So much fun...

Jeannine, God bless her, deserves full credit for putting the two together. Yours truely here, could not begin to do so! Jeannine sent me the theme earlier today, and then asked me for a photo. We went into it blindly; I didn't even know whether she wanted a horizontal or vertical format. She had already chosen hers. So, when I opened up the finished product, I just sat and laughed. What I forgot to tell her was that I nearly sent her a picture of radishes!

When I saw the theme, I knew it would be a photo taken at our local farmers' market. I am as much in love with the colors and textures of it all as I am with how the food tastes...well, probably even more so. I've caused great fits of giggles from the farmers and their helpers as I've taken pictures of lettuce, beans, and so on. I'm pretty sure I've been called the crazy Americano. The wealth and variety of foods amazes me each and every time; there's just masses and masses of it!  Simply put, we are so very lucky in this country.

Last year, for the first time, I chose a word to focus on for the year. I vacillated among a few choices, one of them being abundance. I simply couldn't seem to make up my mind though.

Shortly after Christmas, I found myself window shopping in Pier 1, and I spotted a framed print of the word "Abundance." Grinning, I left the store with nothing purchased (I could not afford the darn thing!), but at the same time I had my word.

All of last year, and into this one, I focused on what I had versus what I didn't, and I can't begin to tell you how my spirits lifted with that choice. Because even though we've had one rough and rocky financial path lately, we have a lot, and most of it you can't buy at any price. Interestingly, this year's word is simplicity. At first they almost seem to be opposites, but they do connect. When I began to realize what I did have, I also realized I had far too much "stuff," some of which rarely saw the light of day. So, a year of purging began with many a trip to Goodwill. There's more yet to go, but closets and drawers are a bit lighter. The bookshelves no longer groan so heavily. I am using long hoarded art supplies or passing them along to those who will use them. And, the more I give away, the more I seem to gain.

Life is so very good!

Your images look beautiful together! And lovely thoughts about abundance! Have a great weekend Paula!

look at these lovely harvests! -- they look stunning together! Thanks so much for playing along with us:)

Hey, great art, I'll be back to visit your blog for sure. I drew your name as the winner of the Stencil 101: Home Decor book for the giveaway on my blog...congrats! Just email me your address & Chronicle will send the book directly to you. :)

Synchronicity -- a beautiful blend of like minded souls...on the same track (even to the point of almost duplicating one another!) -- abundance indeed!! :)

you both did wonderfully

This is a beautiful collaboration =) You are indeed a foodie. My daughter would love to read this, so I must pass along...
BTW, I thoroughly enjoyed your story along with your picture. It brought me along on your journey, and now onto the next. I loved every minute!

Ah, don't you just love it when things- and people- just click! How fun! And yes, funny how abundance and simplicity go hand in hand. Who'd have known?