Who Woulda Thunk It? 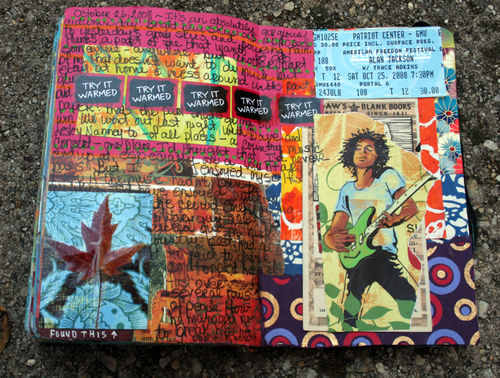 Country music generally doesn't make my heart go "twang!"  I don't loathe it; it generally it  just annoys me. So, when Phil politely inquired, "Would you like to go with Dave and Leslie to a country concert?" I blinked in astonishment, and not so politely responded, "What on God's good earth would make you think I'd want to do THAT?"  Dh responded with several reasons, one having to do with one of the guys singing about his Mercury,  and simply because I love Dave and Leslie's company, and hadn't seen them for awhile, I agreed. And, I'm trying to be more open to new experiences, and this would qualify!

So, last night found me sitting close to peanut heaven in George Mason's auditorium, clutching a drink and popcorn, watching the crowd, which alone provided a great deal of amusement. (Not belittling here...just a crowd of funny people with too much to drink.)  We saw Alan Jackson and Trace Adkins, and both presented a great show. I found myself enjoying it all, and yes, Alan did sing about his Mercury. Apparently, he's quite the thing, having recently being honored in Nashville for selling 15 million record...or something like that. At any rate, he does give you your money's worth!  Im not sure that I'd every really be a huge fan, but enjoyed it all none the less.

Funnily  enough,  I had done the background for this page a few days ago, long before I ever knew I'd be going to a concert. All I needed to do was add the ticket. Apparently, the universe was busy throwing hints, but I wasn't listening.

Finally did get some pics taken of recent pages, and I'll be sharing them over the next few days!